The Nutrition Debate #281: HDL-C and Triglycerides

“A picture is worth a thousand words,” the saying goes. Well, I have three “pictures” that I think will get your attention. They are graphs of my 70+ lab tests for HDL cholesterol and serum triglycerides between 1980 and the present. They are by definition n=1, dismissed therefore as “anecdotal.” In the whole, however, for the early years (Fig. #1) they are illustrative of the human condition for people eating the Standard American or “Western” Diet. In the middle years (Fig. #2) and later years (Fig. #3) they reflect the changes that can – and did occur in my case – with a change in diet.
Figure #1 below shows my HDL-C as the almost perfectly flat blue line from 1980 through September 2002, all the while eating the Standard American Diet. The first 11 tests (from 1980 until 12/01) are all in the high 30s and low 40s (range 37 to 42; average 39), which is “low,” i.e. just below “normal” range for 40 for men (50 for women). 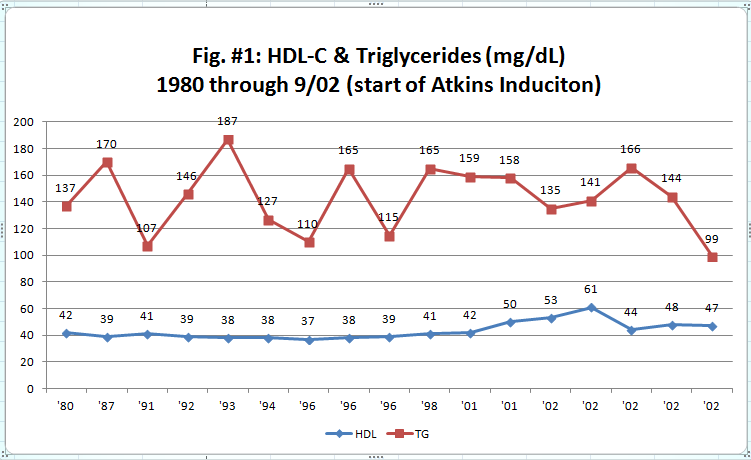 Do you know what your HDL cholesterol lab test values are? You should. They and your triglycerides are more important than your Total Cholesterol (TC) and LDL-C scores. The reason your doctor tracks your Total Cholesterol is that he can affect TC and LDL by writing a script to lower them. He can put you a statin. My doctor put me on a statin in December 2003.
The upper line, in red, tracks 17 triglycerides (TG) over the same period. They are more variable (TGs usually vary from 20 to 23 percent, and can range as much as 40% (fasting vs. non-fasting). Note that they are not “high” (>200), but they hover around the “borderline” level of >150. The average is 143 (range 107 to 187). Neither of these tests would get your average doctor too exercised. He would say he’s going to “watch” them (what else can he do), and to “continue taking the statin.” 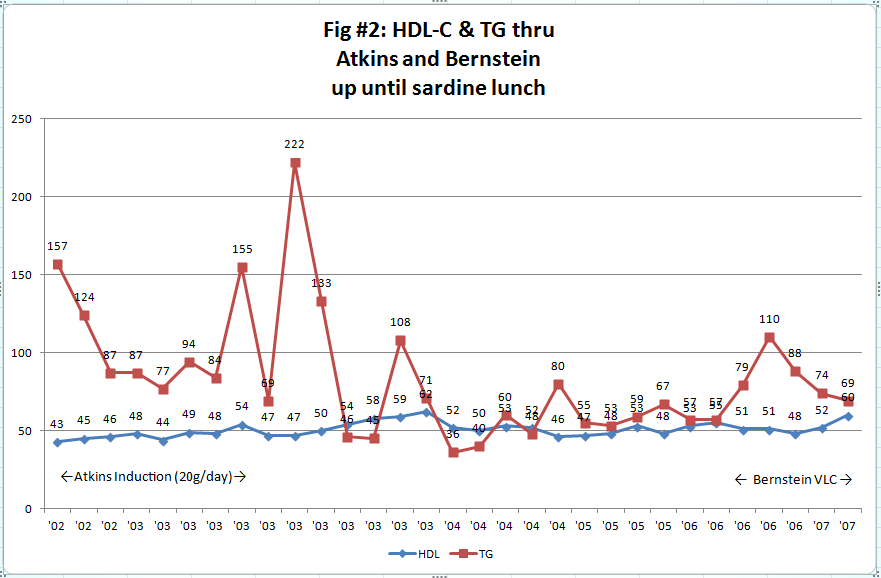 Figure #2 shows HDL-C after I started on Atkins Induction (20g of carbs a day!) and followed it faithfully for nine months, then a sort of Atkins Maintenance for the next three years. I then went “off plan” in the summer of 2006, and to get back on track, I did the Bernstein 6-12-12 plan for diabetics (30g of carbs a day) for a year (9/06 to 9/07). Note that during this 5-year period my HDL-C crept slowly up from 43 to 60. The “curve” was still straight with most values in the high 40s and low 50s (average 51 vs. 39 on the SAD). TGs were lower (average 84, range 36 to 157 with one aberrant (222). Your average doctor would be pleased with these HDL-C and triglyceride lab tests, and he would advise “keep taking the statin”
Figure #3 is the most interesting by far because it is in every respect “aberrant” to the clinician. In fact, it’s paradoxical. 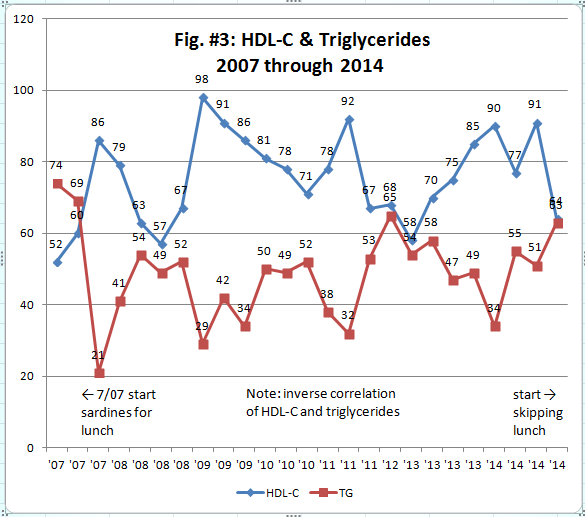 Note that the blue and red lines are inverted. The HDL-C in virtually every case is greater than the triglycerides! The average of 25 HDL-Cs is 75 (range 52 to 98). The average of 25 TGs is 49 (range 21 to 65). Note also that there is definitely an inverse relationship between HDL-C and TG: when HDLs are high, the corresponding TG is low. Examples of the most extreme inverse relationships are HDL: 86/TG: 21; HDL: 98/TG: 29; HDL: 92/TG: 32; HDL: 90/TG: 34. My doctors (and others) want to know how I did it. My answer was originally that I didn’t know but that I attributed it to eating a Very Low Carb Ketogenic Diet (VLCKD). As the last chart shows, that was only a small, perhaps not significant, part of the story.
My editor made the observation that the can of sardines in olive oil probably made a big difference.  So, when I finally decided to chart my HDL-C and triglycerides I noticed that the really big change (the inversion of HDL-C and TGs) began long after I had been eating Very Low Carb. It began while I was in the middle of Bernstein, still taking a statin, and starting to take fish oil supplements (April 2007) and then eating a can of sardines for lunch (July 2007). I found the dates by searching my posts on the Bernstein Forum, a good place to hang out, btw, if you’re diabetic.
I started taking 2 grams of fish oil supplements a day (each 1 gram capsule containing 300mg of EPA and 200mg of DHA). I posted on the Bernstein site that “I had read on the Mayo Clinic website, on a drugs and supplement tab, that ‘There is strong scientific evidence from human trials that omega-3 fatty acids from fish and fish oil supplements (EPA + DHA) significantly reduce blood triglyceride levels.’  It goes on to say, ‘Benefits appear to be dose-dependent, with effects at doses as low as 2 grams of omega-3 fatty acids per day. Higher doses have greater effects, and 4 grams per day can lower triglyceride levels by 25-40%.’ It continues, ‘Effects appear to be additive with...statin drugs…’”
In 2007 I was still taking a statin. I had now lost 170 pounds, my bp and bs were in control, and my type 2 diabetes was in remission. Then, when my doctor observed how my HDLs had skyrocketed and my triglycerides had plummeted, he concluded that I was no longer at “high” risk of CVD. In October 2008, without any “coaching” from me, my doctor took me off statin drugs.
In the next column I’ll tell you about my history of Total Cholesterol and LDL-C (before, during and after statins). Then, in the next, about my TC/HDL and TG/HDL ratios and an interesting hypothesis about triglycerides and dysfunctional HDL.
Posted by danbrown at 7:30 AM