In The Nutrition Debate #281 I documented the phenomenal transformation of my triglycerides (TG) and HDL cholesterol (HDL-C) over the last 35 years, since I began keeping lab reports from my doctor’s visits. Okay, mock me, but this slightly obsessive behavior does have redeeming value: it gives an objective picture of changes brought about by my diet. The transformation started in 2002 when, on my internist/cardiologist doctor’s advice, I began to eat Very Low Carb to lose weight. He said, as we went down the hall to schedule my next appointment, “It might even help your [type 2] diabetes.”
He was “right as rain,” of course. Besides eventually losing 170 pounds, I was able to stop taking almost all of my oral diabetes meds, and my fasting blood sugars were consistently under 100 without meds, something I hadn’t seen in the previous 16 years of leaving my diabetes management to my doctor/meds.  My A1c’s dropped to the mid 5s, my blood pressure improved from 130/90 to 110/70 on the same meds, and my CRP, an inflammation marker, went from “high” to “low” risk of CVD. Finally, my lipid (Cholesterol) panel dramatically improved, specifically HDL-C and TGs. (See #281.)
Figure #4, in highly compressed format, shows a composite history of my HDL-C and TG values over this 35-year odyssey. 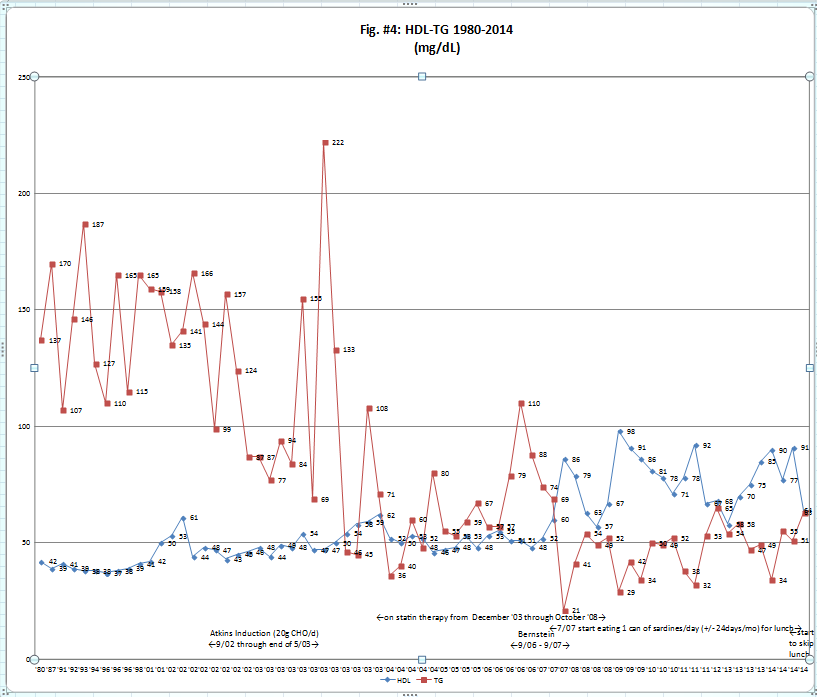 About a year after starting Very Low Carb (Atkins Induction), my doctor started me on a high dose statin. It was warranted, he said, by the guidelines. I was both a long-time type 2 (since 1986) and I was, according to the scoring method he used, at “high” risk for cardiovascular disease (CVD). And I was still morbidly obese, although 60 pounds lighter by Atkins Induction.
As Figure #5 shows, the statin “worked” in the sense that it lowered both my Total Cholesterol (TC) and LDL Cholesterol (LDL-C) dramatically. Note that before starting on a statin, my TC and LDL-C were “borderline” and “slightly high” respectively. Thirty-two TCs averaged 195 and twenty-eight LDLs averaged 131. These were both “typical” for people who have been eating the Standard American or “Western” Diet for a long time. But for diagnosed type 2s who were at high risk of CVD for reasons, including obesity, an LDL target <100 was recommended. For type 2s with diagnosed CVD (I was not), the goal was <70.

During the five years (12/03 – 10/08) that I took various statin drugs, my TC averaged 125 and my LDL averaged 58 (average of 20 lab tests). You might fairly conclude that the statin “worked” perhaps too well. In the meantime, as a consequence of my dietary changes alone, I had lost 170 pounds, my blood pressure had dropped to below goal, my HDL had more than doubled and my triglycerides had dropped by more than two-thirds (see #281). (On the Bernstein 6-12-12 diet, a Very Low Carb diet program to which I had transitioned in September 2006, I had lost another 100 pounds in just under a year.)
So, after all my risk factors had improved so dramatically, and all had stabilized, after 10 more months on low-dose simvastatin, my DOCTOR suggested that I discontinue taking a statin altogether. Again, see the Nutrition Debate #9, “Metabolic Syndrome,” and The Nutrition Debate #25, “Understanding Your Lipid Panel,” to understand the rationale.
After stopping the statin, my TC increased to 214 and my LDL increased to 125 (average of 19 tests), versus 195 and 131 before.  But while both are still “borderline” by the old standard, neither is of any concern to my doctor. Nor should they be, because of my greatly improved HDL-C and triglycerides. Remember, TC = HDL + LDL + TG/5. PS: PLEASE read the Nutrition Debate #9, “Metabolic Syndrome,” and The Nutrition Debate #25, “Understanding Your Lipid Panel,” to understand why. Also, stay tuned for the next column which will delve into TC/HDL and TG/HDL ratios as predictors of CVD.
We will also describe some recent scientific studies and hypotheses regarding using triglycerides alone to track and monitor CVD risk…all of which brings me back to Figure #4 in this post (above) and to Figure #3 in The Nutrition Debate #281. If you are persuaded by these data and would like to lower your triglycerides (and raise your HDL-C, since they are, as I have shown, inversely related), then I hope you will consider cutting your carbs along with supplementing with fish oil (at least 2g/day but not more than 3g/day), and of course eating a can of those delicious sardines in olive oil for lunch every day.
What’s your favorite brand of sardine?  How do you get fish into your diet?
Posted by danbrown at 7:14 AM