In her very well received presentation at the 1ST Nutritional Ketosis and Metabolic Therapeutics Conference in Tampa recently, Dr. Mary Newport told the story of her husband’s progressive neurodegeneration starting 13 years earlier. It is a story she had told before, and written about in 2008, but she still wonders, “WHAT IF THERE WAS A CURE FOR ALZHEIMER’S DISEASE AND NO ONE KNEW”? She says, “I plan to tell everyone I can…” She also encourages readers of the article cited above to, “Feel free to make copies and pass this write-up on.”
Dr. Newport’s frustration is palpable. After relating the prediction “that 15,000,000 people in the United States alone will have Alzheimer’s Disease by the year 2050,” she cites research done by the NIH’s Dr. Richard Veech:
“In 2001, Dr. Richard L. Veech of the NIH, and others, published an article entitled, ‘Ketone bodies, potential therapeutic uses.’ In 2003, George F. Cahill, Jr. and Richard Veech coauthored, ‘Ketoacids? Good Medicine?’ and in 2004, Richard Veech published a review of ‘The therapeutic implications of ketone bodies....’ These articles are not found in journals that the average physician would read, much less the lay public. Unless you are researching the topic, it is unlikely that you would ever randomly come across this information.”
When Dr. Newport’s husband Steve started to show signs of progressive dementia, she thought, “Strange to have no short term memory, and yet the information was filed somewhere in his brain.” “My gut feeling is that diet has something to do with the fluctuation, but what?” Then, 8 years ago, while researching new drugs his doctors were proposing, she learned (in another drug maker’s patent application!) that “the promising ‘ingredient’ in [that “other” drug] was simply MCT oil.” “In a pilot study,” they said, “some people improved on memory testing with the very first dose.” So, Dr. Newport decided to try it for Steve. What did they have to lose, she reasoned?
The results of Dr. Newport’s beginning a therapeutic dose of coconut oil (60% MCT) for Steve are best described by these three drawings of a clock (a specific test for Alzheimer’s Disease). They are indeed pretty compelling. 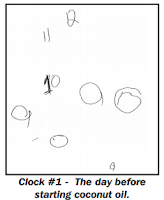 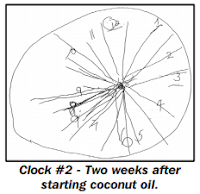 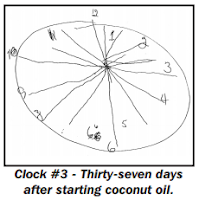 Dr. Newport was advised that the “clock” on the left indicated Steve was “leaning more towards severe than moderate AD.” In clocks #2 and #3 there is an obvious marked improvement. Extraordinary, don’t you think?
Dr. Newport used coconut oil with Steve “because I didn’t know at that point that I could easily buy MCT oil online.” Steve took 7 teaspoons of coconut oil twice a day, which was twice the dose in the patent-application, and sometimes more, “to make sure that there were no periods without ketone bodies circulating,” she wrote.
“As an alternative, one could take 4 teaspoons of MCT oil once or twice a day, or more often as tolerated,” Dr. Newport says. “Some people may experience a sense of ‘fullness’ or even have diarrhea after taking this much to start, but this problem can be reduced by starting with one or two teaspoons and increasing over a week or so to the full amount.” Since writing her article, MCT oil is now on the market from various manufacturers in liquid and powdered form, and will soon be available in the U.S. as a gel. I intend to use the gel, prophylactically.
Dr. Newport’s hope is that “Dr. Veech and other MCT oil and ketone body researchers get the funding they need.” As MCT oil is not patentable, Big Pharma (and the Alzheimer’s Association partly funded by Big Pharma), can’t profit by it, so why should they spend on the RCTs to prove efficacy? But YOU don’t have to wait to try this “treatment,” either as a therapeutic or prophylactic practice. What have YOU got to lose?