Retrospective #355: “Before and After”

It strikes me as odd that the axiom, “A picture is worth a thousand words,” is barely a hundred years old. It is not surprising, though, that it is attributed to a newspaper editor. As overworked and hackneyed as it is, it is nevertheless true, as these pictures, taken before and after a few years of Very Low Carb eating, testify. 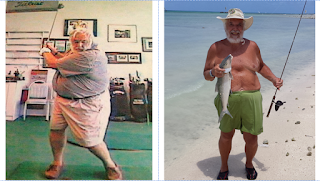 Equally persuasive are simple line charts, with values, as these two, which show respectively my HDL-C and my triglycerides over 35 years, the last 14 of which (2002-2016) were driven by my Very Low Carb Way of Eating.

Lest any doubt remain, this next chart shows that my Total Cholesterol averages over the same time frame were stable, contrary to the perennial declamations of naysayers of the conventional medical persuasion.

Enlarge these charts and look at the numbers, before and after 2002, when I started to eat Very Low Carb.
Posted by danbrown at 4:51 AM